The car carrier Golden Ray, a vessel of 200 m length, was put into service in 2016. On September 8th in 2019 the vessel capsized in the St. Simons Sound, Brunswick (Georgia, USA) loaded with 4200 cars. All personnel were rescued and the fuel bunkers were pumped empty before the salvage operation commenced. The salvage company T&T Salvage was awarded the wreck removal operation considering the concept of cutting the vessel in eight sections and piecewise lifting with the multi-hull heavy lift vessel VB-10,000. The final section was successfully lifted on October 16th in 2021.

During the early sourcing of transport assets for shipping the wreck sections, a twin barge concept was analyzed allowing the hire of two relatively small barges but with a resulting deck space and capacity for carrying Golden Ray wreck sections.

For this study, thec has modeled the twin barge configuration in a multi-body configuration. The barges are connected at deck height using steel wire slings and compression only fender elements at the bottom. The barges are ballasted in a way to allow no relative motion and constantly achieve tension loads in the connecting slings while having the fendering under compression. For this multi-body configuration, sling loads, compression loads as well as stability was assessed applying extreme wind loads while reading reserve freeboard. 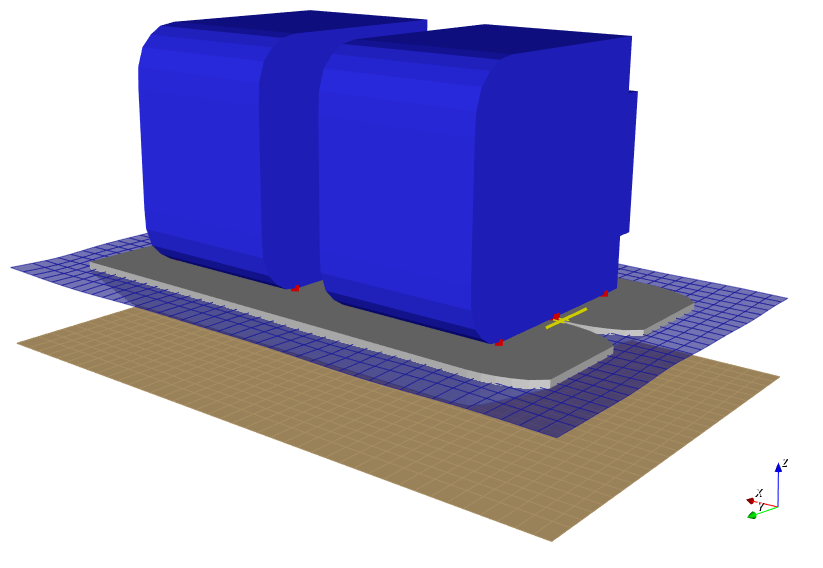 The complex arrangement of the environmental protection barrier and the extreme currents of up to 3 kn made it a challenge to transfer the current, wind and wave loads to the asymmetrical spread with varying water depth and many clearance details to consider.

For each and every position of the wreck sections, thec has analyzed and optimized the individual spread to assure optimum performance with regard to operability in extreme wind conditions. A detailed analysis model was built covering the truss work details of both gantries and the superstructure as well as the buoyancy bodies, directional drag properties including shielding effects and the diffraction analysis of the submerged hulls to properly attract wave loading.

When iterating the directional dependent environmental limits, the requirements on allowable line loads, clearances and anchor uplifting forces were considered.

Environmental limits are calculated for each operational step:

In the final step of each assessed scenario, the transport barge or dock is introduced as an additional body. The resulting multi-body system was analyzed for load transfer from the transport barge to the VB-10,000 via interconnecting mooring lines and the total mooring spread loads considering the entire system. 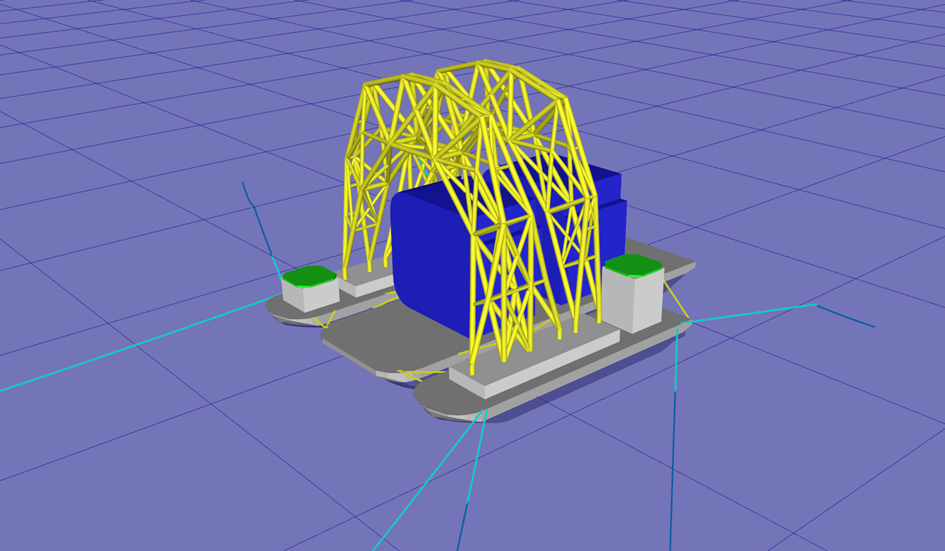 thec has modeled the multi-body arrangement including the quay side and performed static load analysis applying omnidirectional extreme wind speeds to find the resulting equilibrium floating conditions in all degrees of freedom. The quay side mooring geometry was optimized based on the findings leading to an optimal utilization of the available assets.

To avoid over utilization of the mooring lines due to storm surge scenarios, a minimum required slack was defined considering all individual mooring and fender loads between docks and quay as well as the inter section line and fendering loads between the docks themselves. 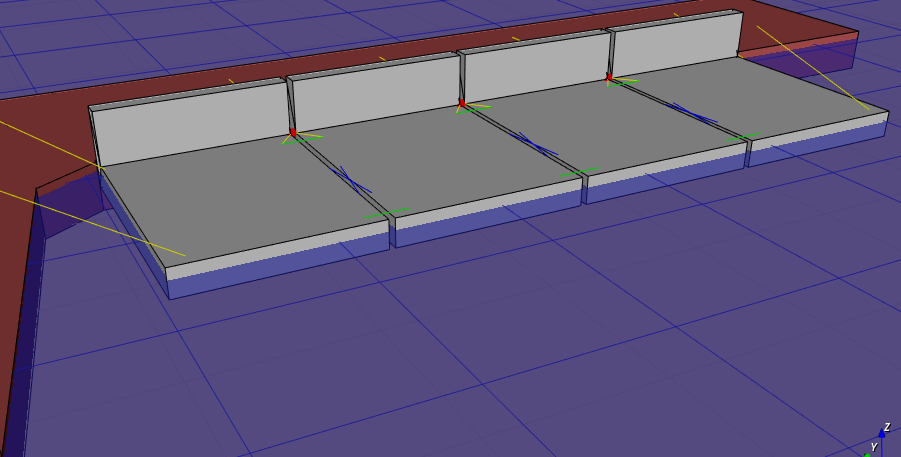 Detailed lifting load analyses were performed by thec for the multi-body arrangement consisting of both VB-10,000 hulls, both gantries, the spreader beams and the lifted cargo piece as separate rigid bodies being connected with different types of connector elements. The static equilibrium is iterated in six degrees of freedom considering the stiffness of the connector elements as well as the wreck stiffness.

The floating condition of each hull and freeboard readings as well as the transferred loads in all slings (wreck section to spreader and spreader to gantry structure) are calculated for an envelope of the center of gravity location. 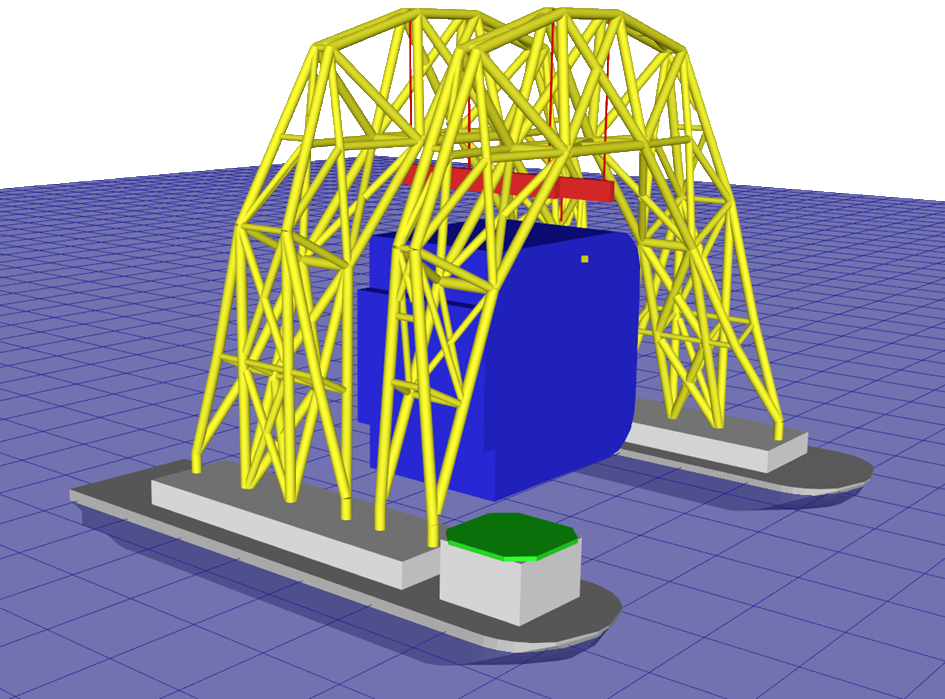 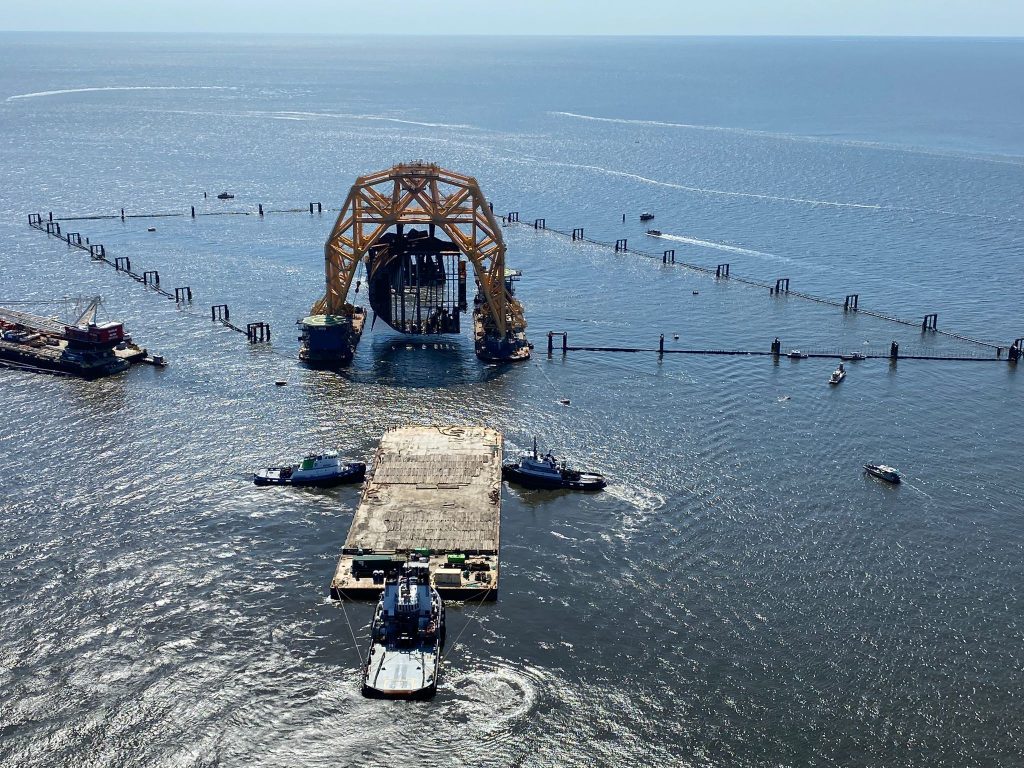 The VB-10000 holds Section Three of the Golden Ray wreck as tugs move the Barge Julie B into position underneath the section during transloading operations on Saturday. St. Simons Sound Incident response photo.